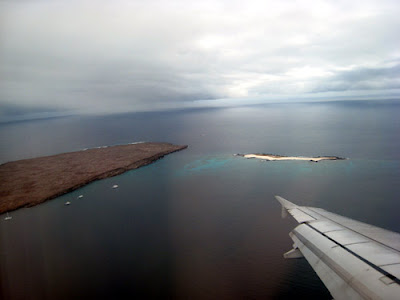 After getting married on October 14, 2006, we took our honeymoon trip to the The Galapagos Islands, Ecuador, and Macchu Picchu, in Peru. Of course we covered some ground in-between. Our fourteen-day trip started the morning of December 10 and ended the morning of December 23. In paying Adventure Life for the trip in full (we booked after the deposit was due) + airfare and additional gear and food, we spent a whole lot more than anything we will probably pay for in awhile (at least until the housing market comes down). But overall a great experience and lots of fun.

The following was originally written by Elaine, 12/11/2006 at Ecuador's domestic airport, waiting for a flight to the Galapagos

After a 2+ hour flight from LAX to Houston, and 4 hr 40 min flight to Quito, Ecuador, (10:40 pm arrival) we arrived at Mansion del Angel late last night. The Adventure Life guide who brought us, Rodriguez, told us about studies of tourism at the university, why the national currency of Ecuador is the dollar and has been for six years, and how there are plans for South America to be united under a common currency, like Europe's euro. It was chilly when we got to the bed and breakfast, as night-time weather is 10-11 degrees Celcius, around Farenheit 50 degrees.

The place we stayed, where we will also stay when we return from the Galapagos, is a gem that, from the street and outside the gate, looks like nothing. Once inside, there is a lovely garden, and upon our entry I was amazed at the ornamentation and interior decor, which had themes of luxury, tradition, and what I most appreciated -- Christmas. Greens (fresh ones!) were laid out in several places downstairs. I stopped and bent over to smell them while Alex was checkin in. Pointsettia were also out in pots, as were a bowl of some reddish-orange vegetable or fruit, which I did not recognize.

[Later we found out it was a tree tomato, sort of passion fruit-like in flavor, from which a juice is made.]

There are a lot of people getting on a flight now, and I wonder if it's ours. It's leaving from the wrong gate, but our flight was supposed to board ~ 15 minutes ago. It makes me appreciate the omnipresent signage in U.S. airports. At the same time, I appreciate the laid back environment here (although it may only seem that way to me).

Despite Alex's concerns, we did make it onto a flight that brought us to Guayaquil's airport and, subsequently, the Galapagos Islands (Baltra). Someone from Adventure Life picked us up at the airport, I did not catch his name. Thinking now, though, he may not have specifically been with AL, but his job was to get us to our ship, the Beluga.

Our first sighting of wildlife, besides some finches or other small birds near the airport, was a large sea turtle that greeted our ferry as we passed by. The ferry brought us to Baltra, and our guide person brought us in his truck to Santa Cruz. He did not seem to speak English. Alex talked to him very briefly using Spanish, but our ride was largely a silent one. From Santa Cruz we took a panga over to the boat, although not before a pleasant meeting with a small land lizard that was hanging out on the dock. It (the lizard) seemed rather slow moving and unafraid.

After our arrival on the boat, we learned that most of the ship's travelers have been here since Friday, making today their 4th day. Three from the ship are leaving tonight. Our fellow travelers seem really friendly. They are mostly British, followed by U.S.-Americans, and 3 Germans, one of whom will depart the boat today. The boat is nice; in particular, it is clean. It is pitching while tied in. We will see what the motion is like tonight during what we are told is a 10-12 hour navigation.

The cacti in the area surrounding Baltra remind me of dipping a wooden stick in glue, then a bowl full of cactus prickly pear leaves, as I told Alex earlier today. What you get is a rather haphazard-seeming result like this.
Posted by eraine at 4:44 PM