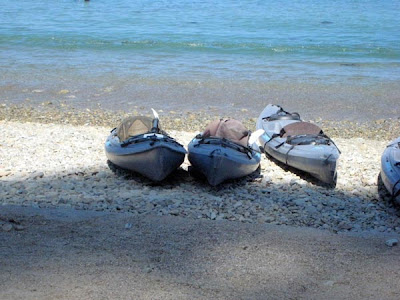 We recently returned from a short (3 day, 2 night) kayak camping trip to Catalina Island. It was a pretty last-minute trip, which we decided on just one week before we actually went. I guess this puts us somewhere between spur-of-the-moment people and planners.

Parson's Landing is a campsite north of Two Harbors, Catalina, accessible only by moderate hiking or kayaking. Kayaking sounded like fun, and we thought we could probably manage 4.5 miles each way. Unfortunately, since it's apparently not Catalina's high season for tourists, ferries from the mainland are not as convenient nor as frequent as we would have liked. Somehow, despite some initial uncertainty about the short trip, we ended up staying at the original and an additional campground, and we kayaked over 20 miles in two days. Although we have no photographic evidence, we encountered abundant wildlife: one bison, several small lizards, a squirrel or two, pigeons, crows, seals, fish that jumped out of the water, fish that stayed in. Alex got to see the seals up pretty close. A number of them (4-6) were resting on a rock when he came from the other side of the cave, hit his kayak against some rocks, and startled the seal pack into the water. As for the trip overall, we are pretty sore, but it was a fun experience that we wouldn't mind doing again.

More details for the curious or those who might want to try such a trip:

There are a few disadvantages to not planning enough ahead of time, of course. For example, friends you invite at the last minute to join you might not be able to arrange for it to happen, much as they'd like to come. Also, you may not have time to gather information that would be useful for your trip. Things that require reservations ahead of time, like campgrounds, might be all booked. Finally, last minute decisions increase the likelihood that you may end up with less rational choices than you might have otherwise.

On the other hand, not planning trips far in advance probably will work out just fine if you aren't trying to vacation or travel during high season (Spring Break apparently doesn't count for Catalina), you're okay going by yourselves (or yourself), you have a flexible schedule (Alex does and I had a week off), and you have some small sense of adventure.

It was more water than we needed to bring, especially since we got more water than we could use at Parson's Landing. We lost the granola bars (we think they were left behind at PL), we had sufficient food remaining when we landed -- a bunch of cheese, leftover and wilted spinach, some grape juice, unopened cranberry, an apple and a pear, 2 bagels, 1 waffle, some trail mix, bit of chocolate, water.

We froze what we could (the juice, the water, the frozen stuff) and it kept everything else cool for a couple of days. We tried to eat the things that were most likely to suffer from warmth first (mostly the frozen goods). It was really nice to have fresh fruit. 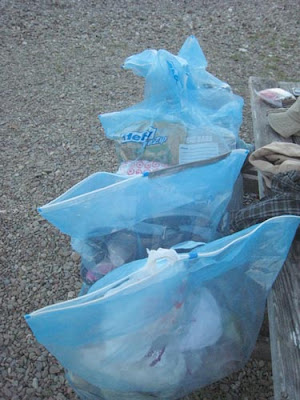 We packed gear:
A 2-person tent, a sheet and three blankets (if we did it again, we'd get sleeping bags), clothes, GPS, two headlamps, snorkeling gear (we would have liked to snorkel, but the water seemed too cold), 2 towels, clothes, toiletries, rope, cast iron skillet ('cause I forgot to pack the frying pan! We bought it at Avalon), a cooking utensil (purchased at Two Harbors, also forgotten in the packing process), duct tape (bought at Two Harbors, was useful for repairing plastic bags), EXTRA BAGS (ziploc and plastic, which were definitely handy), and we packed all of our gear in Hefty's GIANT ZIPLOC BAGS, which we had marveled at and made fun of a whole lot before we actually needed and bought them. As a side note, one of our bags got punctured (it was set down on rock) and one of our zippers ripped (but duct tape mostly solved the problem).

Our transportation in a nutshell:
Day One (3/12) - 4.5 miles kayaked
8:50a Drove to Long Beach in the morning
10:00a Took Catalina Express from Long Beach (45 min or so crossing) to Avalon.
12:00p Took the jungle bus from Avalon to Two Harbors, w/stops inbetween.
2:00p Randy from Descanso Beach Ocean Sports delivered us two Scupper Pro kayaks and a triple burner propane stove
3:30p We launch from Two Harbors, having packed all our belongings into the kayaks, and paddle northward to Parson's Landing. We stop once at a tiny beach along the way for a granola bar and trail mix snack.
5:00p Kayak becomes increasingly tiring, with moderate-sized currents and wind pushing in a direction opposite of where we're trying to go. We pass kayakers going the other way, Alex shouts and asks how far to Parson's and they say it's just around the corner.
5:30p Parson's landed! 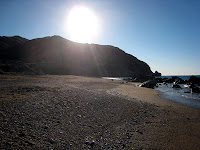 We reserved site #2, were told that people had reserved #8 -- everything else was up for grabs, but 2 looked good. Amenities at Parson's Landing: park benches at the campsites, fire rings, firewood and water that you get in a locker assigned to your site, chemical toilets, trash bins (which we did not know about in advance), and a lovely ocean view. We also found multiple grates (the kind you might want to grill on over the fire) and a fire glove near our fire ring, and someone had left 18 cents and a seashell.

Day Two (3/13) - 12 miles kayakedWe had breakfast of waffles (we had made them at home and brought them frozen in the cooler -- they were smashed a bit unrecognizable for a while) and scrambled eggs. The waffles were alright, but syrup would have been nice. After packing up the tent and fitting everything back into the kayaks, we launched sometime before noon and headed back down the way we came. We braved some opposing currents and wind to check out a cave just on the south side of Two Harbors, but didn't see much because it did not go in far at all. The second cave, a little bit south of Two Harbors, was more rewarding -- we could actually pass through it. When Alex came out the other side, he spotted a number of seals resting on the flat of a rock. He said they looked shocked to see a human up so close and, startled, they quickly slid into the water. You do get to see seals hanging out now and then, though, either with you in the water or lounging on land, while you kayaking along the coast.

Not too long after we passed Two Harbors we kayaked surrounded by mist. It was difficult to tell where the coast would end up ahead.  As a result, we weren't sure which direction to paddle until we got closer to the land. The best parts for kayaking were the nearly still waters with barely a ripple. It's a very nice feeling to pull yourself through the water and glide.

As the sun was starting to set behind hills, we checked maps and landing signs more frequently to try and figure out where we were going to stop. We were aiming for either Ripper's Cove or Goat's Head, both of these recommended by Randy when he had provided us with kayaks. Around 5:30 or 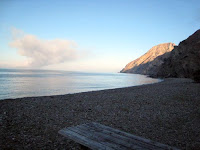 so we ended up at Goat's Head. Alex pointed out that the landings and launches had gotten easier each time, although it's not clear how much this was due to water conditions or having done it multiple time. Goat's Head is one of multiple boat-in (they call them primitive) campgrounds along the coast. There are no toilets (you've gotta bag any leavings and carry them out!) and you're not supposed to have open fires (although it looked like someone had tried to create a fire ring where we stopped). Goat's Head had benches (some sites do not), and again, a fantastic ocean view.

Day Three (12/14) - 7 miles kayaked
It's hard to say how many miles we actually kayaked. The distances I'm giving are estimates based on what people said distances ought to be and our GPS, which measures between points as the crow flies.

We left earlier in the morning compared to the day before (we had slept around 10 and gotten up close to 7 or so). Despite waking to muscle soreness (some caused by kayaking, but some possibly related to sleeping on hard ground), I felt like the more we kayaked the easier it got. It took us a few hours, but we arrived at Avalon's Descanso Bay a little past noon. After not having seen people around for such a long time (besides passing boats at a distance), it was definitely strange to approach the bay and its large flocks of neon kayaks carrying kayakers.

Kayaking Catalina Island offers some info and advice on kayaking around Catalina (and kayaking TO the island from the mainland!
Catalina Island Kayak Camping, How to is Descanso Ocean Sports' very helpful page with pretty much everything you need to know. Also, they can rent you pretty much all the gear you might need.
Catalina Island Camping Page has info on the different sites around the island, available facilities, and online reservation
Posted by eraine at 10:21 AM