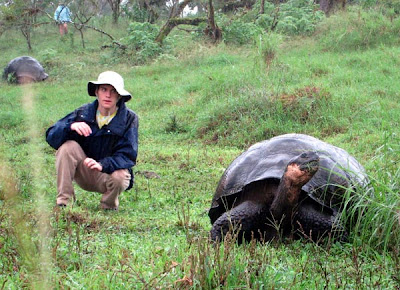 Yesterday afternoon after lunch we went to the highlands on the island of Santa Cruz to go see the giant tortoises of Galapagos. We took a bus up from Puerto Ayora for about a half hour ride to an area labeled "Tortoise Territory", privately owned land, but the owner allows people to come through in tours. The giant tortoises were amazing! We were instructed on how to approach them -- slowly from an angle, crouched down to look as small as possible, and noticing when they started to make a low hissing sound that indicated when they were concerned. I think we probably saw 15-20 of them scattered around the lush grass, and

certainly there were more than those around.

I liked watching them stick their heads out to grab a bite of grass, then munch away for a bit. I also liked the fact that you could tell which direction the tortoise had come from due to the flattened trail of grass they'd leave behind. The amount of tortoise leavings (poop!) on their flattened grass paths was not insignificant. It was tricky to look around and try not to step in any at the same time.

Last night we had a long naviation (what they call it when the boat is moving), travelling to the west side of Isabela from 9pm to 6:30 this morning. The boat movement was very uncomfortable for Alex and myself. Alex laid down on the room floor and I was hunched and balled up in the corner. Eventually Alex puked. It had been an experiment to try the ginger as a seasickness remedy, but to no avail. At least the vomiting made him feel better afterward. 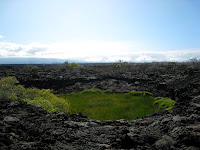 Yesterday morning we went to Punta Morena, from which we could see at least four volcanoes that surrounded us. We took a couple hours' hike (walk) along a trail that took us through lava fields. The entire area was made of black lava rock, with occasional pinto tree, sedges, and cacti here and there. We also had the opportunity to view several oasises (oases?), where fresh and brackish water had accumulated and around which trees and other greenery had begun to line. We saw in one of the oases some moorhens and flamingos. The flamingos were quite pink, and the moorhens had red beaks and parts of their faces. They all were swimming in the water surrounded by the lava-formed rocks. The pools of water were formed by air bubbles which had collapsed to form a hole where water could now collect. Towards the end of our hike there was an additional pool of water, this one filled at high tide from the sea. Here we had the chance to see medium-sized sharks swimming about in the water. According to our guide the sharks are vegetarian. If they were not, they would have had plenty of fish to eat.

The waves started to get bigger as the tide was coming in. Luckily we were just leaving.

After lunch yesterday -- my first time snorkeling ever! And it was great! Although, at the very beginning after we got into the water, I started hyperventilating, essentially, while wearing my snorkel mask. After a while I became more comfortable breathing, and it was wonderful to be able to look at all the fish and, for the most part, to be ignored enough by the fish so that they didn't seem to mind me swimming up. The best part of the snorkeling experience, however, was to be underwater and swimming with sea turtles. There were one or two our in the open water, and later we got to see several more swimming about in a pool. They are wonderfully graceful under the water as they glide along. And the feeling of being near them is one of great awe and great peace.

Snorekeling was very enjoyable. Unfortunately Alex was freezing despite our long-sleeved underwater shirts and the shorty wetsuits we rented from the boat. He was shivering cold and explained to our dinghy driver (in Spanish) that he had an insufficient supply of bodyfat. He may have caught cold since then, sneezing a bit and having a headache. Consequently Alex did not come snorkeling today. But hopefully he will feel better and possibly snorkel tomorrow.

In the afternoon we rode the dinghys and towed two kayaks into a mangrover forest. Highlights of the experience included seeing a whole lot of sea turtles all around, three penguins (one which decided to swim), several sea lions lounging on the trunk of a tree, and kayaking around for a bit. I managed to stay out of the water. Unfortunately, Alex did not.

I hope that my cold is gradually getting better. I hope that Alex does not get sick.

I have listened to a bit of Learn Spanish podcast and I wish I had learned more of the language ahead of time. It's so nice to be able to (I wish I could) communicate.
Posted by eraine at 5:09 PM