Getting a parking un-ticket in L.A. 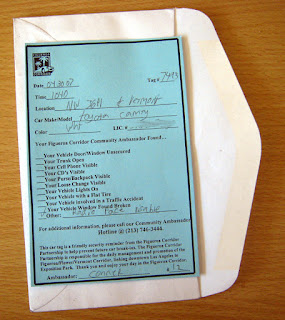 Since living in Los Angeles (I'm going on 8 years now), I have definitely gotten my share of parking violations. Between morning street cleaning in Westwood, Palms, USC, and Mar Vista; expired meters at UCLA and USC; one ticket for parking against a red curb (I parked late at night and didn't see); and one ticket for parking on Vermont in Koreatown into rush hour (I didn't think lunch would last that long), I would be a whole lot wealthier were it not for my careless non-driving.

So after leaving campus on Monday last week, as I approached my car from up the street, I was definitely not shocked when I noticed that a small, white envelope had been tucked under my windshield wiper. Usually I know when I may be unlucky because I've been kept late and my parking meter has probably expired, so I started to become confused and angry at L.A. and myself.

I extracted the envelope and examined the paper inside, scanning it in attempt to determine my fault. Imagine the pleasant surprise and relief when I found a reminder from my Figueroa Corridor Community Ambassador informing me that my radio faceplate being visable (sic) might lead to a future car break-in. Various sorts of crimes occur with some frequency in the area immediately surrounding USC. I was regularly reminded of this by the weekly (or more) crime report emails sent to USC until I set up a filter to remove them from my inbox.

What the Figueroa Corridor Partnership is doing to try to prevent car break-ins seems helpful and interesting, although I wonder about how effective it will be in deterring car crimes. Though this completely anecdotal, I am the worst when it comes to protecting my car from break-ins. I regularly go to my car to realize that I have left it unlocked, I have left my window half-way rolled down, my wallet sitting on the passenger seat, or similar things. As far as I know, my car has never been broken into. I have friends whose cars, on the other hand, have been broken into multiple times. Alex's car was broken into (stereo and other things stolen) when he had parked in my apartment complex's gated, locked garage. His stereo was fancier than mine, but his car also looks like a kicked-in aluminum can. My CD player doesn't work, although you wouldn't be able to tell just looking at it.

I'm unlikely to remove my radio face plate as a result of the un-ticket notice, but getting one does make me feel like the area around USC is a little bit friendlier.
Posted by eraine at 1:57 PM