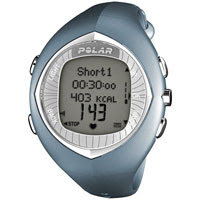 I've been thinking about getting a heart rate monitor for a while now. My last one, a Mio Shape Select Petite bit the dust a little over a year ago, within about a month-and-a-half of my purchasing it on Amazon. Disappointingly, replacing the battery and taking the watch apart only fixed it for a day. My calls to customer support were not returned, and the Mio community emails I occasionally receive are like a poke in the eye (I really should remove myself from their list).

The neat thing about the Mio watches are that they do not require a chest strap for use. You apply your index and middle fingers to sensors on the face of the watch. But I decided that a chest strap wouldn't be too much of a hassle and would monitor my heart rate continuously. After some online research I decided to order a Polar Women's F11 from Amazon. I also considered the Nike Imara, but for reasons I've now forgotten, I decided to go with Polar.

Things I like about the Polar F11:
The chest strap is a comfortable fit. It tracks exercise and fitness progress in various manners, so that you can look over what you've done over the last week. You can upload your data to Polar's online training program with just your watch and a microphone. It's compatible with all of the cardio machines I've tried so far at the gym, so that their output indicates my HR without having to hold onto sensors on the handlebars. It gave me a trophy last night for completing my workout goals for the week!

Things I do not like:
If you set it up for OwnZone it wants you to stay within specific heart rate zones, or your exercise timer won't count down. This seems reasonable if I'm going under, but going over should count, no? But you can turn that feature off. Also, it's pretty bulky for regular wear. Oh well.

The last time I got a heart rate monitor, Alex found amusement in the fact that I would only wear a watch if it was a gadget of some sort. I suppose this is true; I haven't worn a watch since some time in high school when I started carrying around a pager (remember those?). I'm regularly surrounded by enough electronic devices that I expect to be able to determine the time if ever I should need. But I do value data, and I wish more of my behavior could be based on data. People talk about the need for evidence-based medicine. I like the idea of evidence-based living. Some examples of people who interest me:
Anyway, the proof is in the pudding. Hopefully I will continue to improve in cardiovascular fitness and enjoy the process. I did 5.6 treadmill miles yesterday and felt like I could have kept going.
Posted by eraine at 10:59 PM